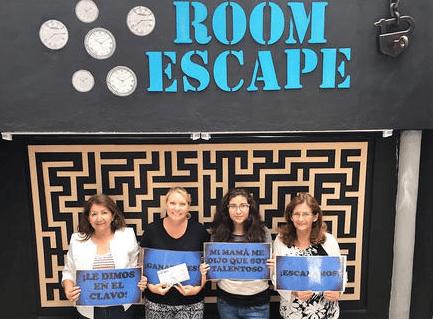 Room Escape Quito is located in the foothills of Parque Metropolitano.  Owned and operated by a local couple, they ensured that our adventure began the moment we entered the premises.  A cobblestone path led us down into reception.  Had we been agile enough, we could have chosen to slide down a parallel sliding board!  We had a choice of three rooms and decided on “La Casa Antigua / The Old House” with a difficulty rating of “alto/high”.
Together with my mother-in-law, aunt, and cousin, we were told the story of an elderly couple whose home was presumed to be haunted.  And then, with the slamming of a door, we were locked in!
I will not divulge any secrets, however, I will comment that Ro0m Escape Quito stuck to its theme. Everything in the room, from the decor, to the music, to the SMELLS, reeked of colonial Quito in the early 1900’s.  The clues and puzzles were also tied to the era.
Our group was never bored and and our individual strengths helped us work well together.  There were clues for the “killer / super investigator” of our group.  She tore through everything mercilessly.  There were intricate riddles for the “observer” and there were clear moments when “social smarts” were necessary to bring it all together.  This same combination is what we strive for at Captured LV.  Though we were thoroughly engaged for nearly 58 minutes, I felt that the room could have used some more mechanical aspects. One of the things that I really liked was that each time we asked for a clue (and we were only given THREE), the clue was crossed out on the screen.  This helped us keep track of our clues.  Other than that, we were on our own!
Our experience was overwhelmingly positive.  I would highly recommend anyone travelling to Quito, to try out Escape Room Quito!